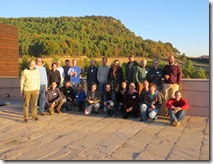 A international team of researches from the EUBON project (Building the European Biodiversity Observation Network) gathered from 25-27th November in Solsona to held the kick-off meeting for two of the project work-packages.

Discussions, including the different members of EBCC-CTFC team in the project, revolved around the development of state-of-the-art methods and models aimed at using the rapidly growing amounts of available data on biodiversity patterns, trends and their dependency on natural and anthropogenic drivers. Other objectives discussed focussed on the analyses of biodiversity and their relationships to various drivers, focussing on populations and species ranges, using newly available data from monitoring, collections and remote-sensing, and the projection of biodiversity patterns to possible future trends and threats to biodiversity across scales based on EU scenario data.